By Joe Viglione, Award-Winning Host of Visual Radio and the Pop Explosion

It would be easy to ramble on and on and on about the juveniles MCC TV3 hired in the past and how Stephanie Burke couldn’t find someone FROM Medford, she had to hire an obedient star-struck young man from Brookline. Go figure.

It is called censorship, people, and it is WRONG.

Yes, I would very much like a digital copy via e mail as well. Thank you.
Wonder if Ms. Dever-Wood will allow the citizens to be on access TV for this election.
Is the Muccini-Burke Administration so terrified of criticism and Stephanie’s inability to speak clearly without being shrill any reason for the Issuing Authority/Mayor to take advantage of the children, senior citizens and cable tv subscribers?
City Hall serves at the pleasure of the Muccini-Burke Administration, not for the citizens of this municipality.
As one notable resident said to me 8:30 pm tonight in another city “Nothing has changed (under Stephanie.)
An unqualified woman, Mrs. Burke, hires a young man to run an access station when he knows nothing about Medford, and personally told me he didn’t know what kind of an agreement to put together for residents who use Verizon.
Unbelievable.
So Stephanie hires someone who admitted to me that he doesn’t know what he’s supposed to know.
As you may have seen the e mail, you know that I sent him a document he can use as a model.
Of course when the mayor allegedly orders the impressionable young man not to do the job the citizens are paying him to do, there’s no access TV during a critical primary election.
This is not a competent mayor.
She’s as incompetent as Rick Caraviello mumbling under oath in a court of law.
You had to be there January 31, 2017 to believe such an incoherent dullard is actually the president of the Medford City Council.
And this is not digression, it is the sad reality of life under Muccini-Burke.
Thank you again for your sending the document, and reading my important thoughts and observations
Sincerely,
Joe Viglione

Now for some fun at the superintendent’s expense – he’s rich, he can afford it:

All you need to look at are the shifty eyes of Roy E. Belson, superintendent of schools, standing next to one of the reprobates from Medford Community Cablevision, Inc., the failed 501c3 that is being investigated by the office of the Attorney General, Maura Healey, to know that Medford Access Television has gone to hell in a hand basket in the era of Hurricane Harvey, and don’t ignore the irony within that statement. 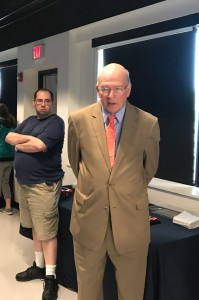 Ben, Ben, BEN – what were you thinking?   If Ben knew about Medford he would have had his can of Raid ready to stop Rabies at the door! 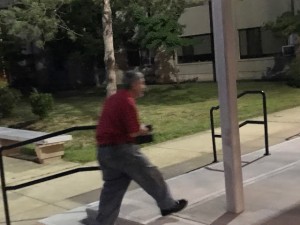 Now there’s a dream date for all you gals on Match.com  Bertorelli or Deluca?

Decisions, decisions!  How about two for one?