A Special Report by Joe Viglione

City Solicitor Mark E. Rumley promised the citizens of Medford, Massachusetts an election for a new board of directors for the access TV station, to be held January 19, 2008.     Rumley was warned when a business partner of Harvey Alberg’s spilled the beans that there would be no election. Rumley, on the board of directors of MCC TV3, knew in advance that Frank Pilleri had no intention of holding an election.  The Solicitor absolutely failed the city by not having the appropriate amount of board members at a December 2007 board meeting. That phony individual, Frank Pilleri, who couldn’t prove in a court of law that an assertion of perjury against him was false (meaning, Frank Pilleri couldn’t prove that he didn’t commit perjury in the filing of corporate documents, under oath)  broke his agreement and “counteracted” the city-wide election.   Rumley called it “the darkest day in the history of Medford Public Access,” but the lip service(s) from the solicitor couldn’t disguise the fact that the solicitor did NOT do his job.

The result was a lawsuit against the city of Medford, court action against an 82 year old man, multiple lawsuits against another former member, TV3 going down to defeat in spectacular fashion, but the Mayor’s cousin, David Skerry, enriching himself at the expense of cable TV subscribers.  Skerry was the best friend of the late brother of Mark E. Rumley and don’t think that this charade wasn’t orchestrated by Michael J. McGlynn because it was.  It’s part of McGlynn’s “Medford Media Blackout” which has served the dishonest Mayor very well over the past few decades. 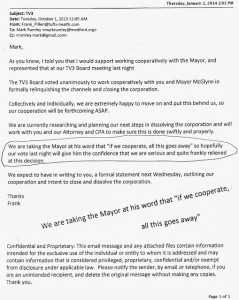 What’s truly vulgar about how Rumley approaches victims of TV3 is that he re-victimizes them either with his legalize – ignoring TV3 crimes to make them look permissible or by trying to put the victims on the spot.  “Well, Joe, I think public access is obsolete.”  That’s lawyer-speak for “get the fuck out of my office, the Mayor stole your access, Fuck You, Joe.”   But the response from the citizen who is not a lawyer was quite telling.  “Oh, education is obsolete? Seniors in Stoneham learning computers, kids learning computers in other cities” (paraphrased.)   “Duh” – Rumley looked like a deer caught in the headlight.     You see, that is how Rumley operates, and it is NOT why the citizens pay him so handsomely…what, $102k one year?    If you use the term “Mickey the Dunce” Rumley will scream from the rooftops “ethnic slur” (on what planet? that was NEVER the intent!)  If you say “Gotta break a few eggs to make an omelette” Rumley’s associate that he shared an office with, State Rep Paul Donato will say “Stalin said that.” (purportedly it was one of Stalin’s henchmen that said it…but that wasn’t the INTENT) the point is, they have an answer for everything and Rumley tries to put you, dear resident, on the defensive when he knows that he has done wrong.

You just have to know how to deal with the hypocritical son of a bitch who bullies the weak while cowering in fear if there’s a gang like Frank Pilleri’s thugs.  Rumley is SO OBVIOUS.   Not man enough to fight on a level playing field, Rumley chooses words to bash you over the head with, or puts your lawyer on the phone for an hour attempting to drive up your legal bill. That’s not an honorable City Solicitor when Rumley picks fights with those of us helping the community, while FAILING TO DO HIS JOB ON THE DIFFICULT TASK OF BRINGING FRANK PILLERI TO JUSTICE, BRINGING HARVEY ALBERG TO JUSTICE, BRINGING RONALD DELUCIA TO JUSTICE.   Rumley runs and hides like a coward when it comes to doing the real job, and will victimize the victim because, like Steve LeBert proved, in Medford, they use their positions of power to bully the weak.  How is Mark Rumley’s actions, on record, any different than the bullying by Detective Stephen LeBert?

Now the new “rumor” they are spreading is that I hate the Catholic Church. You have to love the depth of their depravity.   From “ethnic slur” to “Stalin” to “he hates the Catholic Church” to “public access is obsolete” (so much for education unless the Mayor’s daughters are teaching you at their White Elephant special at the McGlynn school…God, what stupidity will they come up with because I properly used the term “white elephant” ???)  these creepy individuals, Mark E. Rumley, Mayor McGlynn, Stephanie Muccini-Burke, Paul Donato, they all have an answer for everything except for the answers to the pertinent questions about where our money has gone.

ANYONE so defensive to say that we don’t need access, or that Mickey The Dunce is an ethnic slur when THE INTENT WAS NOT THAT

SPEAKING ABOUT INTENT, YOU KNOW WHAT MARK RUMLEY’S INTENT WAS IN THESE TWO STATEMENTS: TO LIE TO THE COMMUNITY

1)THE PEOPLE’S FORUM – WHERE YOU ALLEGEDLY HAVE A FIRST AMENDMENT RIGHT TO TALK TO YOUR COMMUNITY WITHOUT BEING BASHED BY PAUL CAMUSO AND MARK RUMLEY, AS THEY BOTH DID TO ME IN THE MOST HIDEOUS OF WAYS (Rumley, who should know better, and Camuso, painted this writer as a man with Alheimer’z, an 82 year old man who died at the age of 84 after being harassed by Camuso)
“Talking about lawsuits against the city is doing a disservice to the people who are watching this particular forum tonight,” Rumley said.

It doesn’t get uglier than that, people, Mark Rumley squelching free speech.

Nothing like catching a city solicitor lying through his teeth!
1)September 23, 2009   Mark Rumley silences a person helping cable TV subscribers at the People’s Forum.  Rumley is the one citizens were trusting to get us access, but the son of a bitch was squelching free speech, abusing his power and slapping citizens around while TV3 did their little Chumley Report dance on his head.
What a bully!  He picks on the weak and cowers at the specter of Frank PIlleri     Posted Sep. 23, 2009 at 12:01 AM
September 23, 2009 Medford Transcript: “Talking about lawsuits against the city is doing a disservice to the people who are watching this particular forum tonight,” Rumley said
______________________________________________________________
Trying to silence a citizen flies in the face of these lies from Rumley:
“The one sentiment that I have heard that I take great exception to is that the city is trying to limit speech,” said Rumley. “The notion the city would censor or squelch free speech is baseless and as city solicitor I would find any such effort repugnant.”
City Solicitor Mark E. Rumley / Medford Daily Mercuryon or about Nov. 16, 2008 (quoted from the 2nd Judge Jackson-Thompson hearing)

ABOUT THE CATHOLIC CHURCH

CRITICIZING A CHURCH THAT ALLOWED WIDESPREAD CHILD MOLESTATION IS A GOOD THING. IF COUNCILOR CARAVIELLO WANTS TO STAND UP FOR THE CATHOLIC CHURCH WE WELCOME THAT ARGUMENT, ANY TIME, ANYWHERE!

THE CATHOLIC CHURCH NEEDS TO HAVE WOMEN PRIESTS, TO ALLOW PRIESTS TO MARRY, AND NOT TO SHUTTER CHURCHES WHICH IS A SLAP IN THE FACE TO GOD ALMIGHTY.

The closures follow an announcement by the Roman Catholic Archdiocese of New York in November that it would consolidate 368 parishes into 294, reflecting a national trend of parish closures in the United States caused by low attendance, a shortage of priests and financial troubles.